In this case, they were a factor in my having a discussion with Eric Garcetti, the mayor of Los Angeles, who was visiting our office. He was intrigued by the Graphite dashboards we have on 8 monitors around the Ops area and I explained to him a little bit of what's going on in terms of what we're graphing. I'll let you guess who is the mayor in this photo: 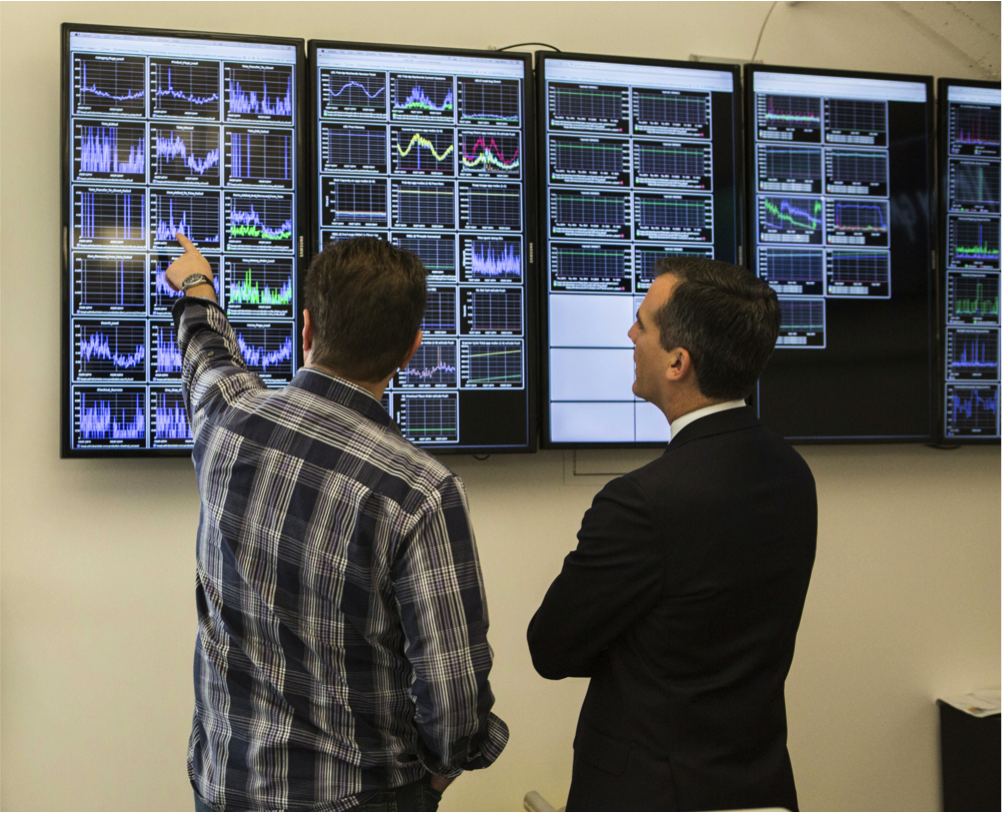 Titus Brown was kind enough to invite me to present to his students in the CSE 491 "Web development" class at MSU. I presented remotely, via Google Hangouts, on "Modern Web development and operations practices" and it was a lot of fun. Perhaps unsurprisingly, most of the questions at the end were on how to get a job in this field and be able to play with some of these cool technologies. My answer was to become active in Open Source, beef up your portfolio on GitHub, go to conferences and network (this was actually Titus's idea, but I wholeheartedly agree), and in general  be curious and passionate about your field, and success will follow. I posted my slides on Slideshare if you are curious to take a look. Thanks to Dr. Brown for inviting me! :-)
at April 25, 2014 No comments:

Why does it work in staging but not in production?

This is a question that I am sure was faced by every developer and operation engineer out there. There can be multiple answers to this question, and I'll try to offer some of the ones we arrived at, having to do mainly with our Chef workflow, but that can be applied I think to any other configuration management tool.

This is a common scenario, and it's supposed to work this way. You do want to test out new versions of your cookbooks in staging first, then update the version of the cookbook in production.

We have Chef attributes defined in attributes/default.rb that serve as feature flags. If a certain attribute is true, some recipe code or template section gets included which wouldn't be included if the attribute were false. The situation can occur where a certain attribute is set to true in the staging environment but is set to false in the production environment, at which point things can get out of sync. Again, this is expected, as you do want to test new features out in staging first, but don't forget to turn them on in production at some point.

We had this situation very recently. Instead of using attributes as feature flags, we were directly comparing the environment against 'stg' or 'prod' inside an if block in a template, and only including that template section if the environment was 'stg'. So things were working perfectly in staging, but mysteriously the template section wasn't even there in production. An added difficulty was that the template in question was peppered with non-indented if blocks, so it took us a while to figure out what was going on.

a) Make your templates readable by indenting code blocks.

b) Use attributes as feature flags, and don't compare directly against the current environment. This way, it's easier to always look at the default attribute file and see if a given feature flag is true or false.

Here are 2 other scenarios not related directly to staging vs production, but instead having the potential to break production altogether.

There is another, even worse, scenario though: you do upload your cookbook to the Chef server, but you realize that you didn't bump up the version number compared to what is currently pinned to production. As a consequence, all the nodes in production that have recipes from that cookbook will be updated the next time they run chef-client. That's a nasty one. It does happen. So make sure you pay attention to your cookbook versioning process and stick to it!
at April 07, 2014 2 comments: